“Photography is truth. The cinema is truth twenty-four times per second.” -- Jean-Luc Godard.

Cinema has the power to shape society's opinion – swaying us in different directions and often exploring hard truths in order to provoke thought and inspire change. This is evident when examining the effects of the civil rights movement on Hollywood.

During the 50s and 60s, Hollywood began casting actors such as Sidney Poitier and Brock Peters in an effort to represent change, hoping to sway the hearts and minds of Americans across the nation. As the movement amplified, more and more filmmakers started focusing on the political and social instability in the country, calling for the end of racial injustice, an issue that is still being explored in today's cinema.

In honor of the landmark films of the civil rights era, Turner Classic Movies and Fathom Events are exploring how To Kill a Mockingbird (1962) and In the Heat of the Night (1967) helped change the trajectory of Hollywood.

“You never really understand a person until you consider things from his point of view.” – Atticus Finch.

To Kill a Mockingbird (1962) was an instrumental film for Hollywood and the civil rights movement, as it was one of the first major productions that directly addressed racism and oppression. Adapted from the novel by Harper Lee, the film, much like the book, gave Americans a glimpse into the segregation in the South [1]. To Kill a Mockingbird explored fundamental truths about racism, discrimination, and an unjust court system toward Black Americans.

The story follows Scout Finch, a 6-year-old girl growing up with her older brother Jem, and her widowed father Atticus Finch. When Atticus is presented with the case to defend Tom Robinson, a Black man falsely accused of raping a white woman, he finds his family the target of racism in their community.

The power and impact of Gregory Peck and Brock Peters's performances sent shockwaves throughout America. Gregory Peck would go on to win an Oscar and be voted “the top hero in a poll conducted by the American Film Institute” in 2003 [2].

Brock Peters, who played Tom Robinson, was an active voice for Hollywood. His performance in To Kill a Mockingbird moved audiences, with his authentic display of emotions when confronting his accusers. Brock Peters and Gregory Peck became close friends, both actively preaching equality and love in a society that needed it. Peters would earn a “lifetime achievement award in 1976 [and] in 1990 from the Screen Actors Guild,” becoming a source of inspiration for many young Black entertainers [3].

The film was a box office success, garnering attention from movement leaders across cultural lines.

“Obviously, In the Heat of the Night was a landmark movie because the timing was perfect. It was right in the middle of the civil rights movement.” – Norman Jewison. 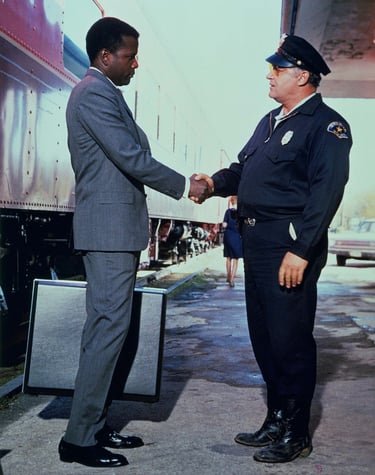 One of the most enduring films from the civil rights era, In the Heat of the Night (1967) explores racism as its central theme. While filming, the civil rights movement was at its height in the South. This led to actor Sidney Poitier and director Norman Jewison receiving death threats and being met with racism. As a result, the film was moved to Illinois.

During production, Norman Jewison became increasingly worried about the safety of the cast and crew. It was only when Robert F. Kennedy encouraged him to keep going, saying "this could be a very important film, Norman. Timing is everything: in politics, and in life itself,” that he was able to complete it [4]. The power and impact of the film was felt immediately, calling for much-needed change.

In the Heat of the Night received seven Oscar nominations at the 40th annual Academy AwardsⓇ. During the awards, the president of the Academy of Motion Pictures, Gregory Peck, made a stance on racism in America. He honored Rev. Martin Luther King Jr. who was assassinated four days before the originally scheduled awards. Peck stated “Dr. King’s influence on the society we live in is that of the five films nominated for best picture of the year, two dealt with the subject of understanding between the races… The lasting memorial to Dr. King is to continue making films which celebrate the dignity of man, whatever his race or color or creed” [4]. The film would go on to win Best Picture, Best Editing, and Best Screenplay.

In the Heat of the Night became an important piece of civil rights cinema, openly exploring a racially divided country during a pivotal time in history.

To Kill a Mockingbird and In The Heat of the Night showed the power that cinema could have on viewers. These films openly and unapologetically challenged the cultural shocks of their time, and the actors involved in them would be celebrated 60 years later.

During the 74th Academy Awards Ceremony, Denzel Washington made a moving speech about Sidney Poitier, saying “Before Sidney, African American actors had to take supporting roles in major studio films that were easy to cut out in certain parts of the country. But you couldn’t cut Sidney Poitier out of a Sidney Poitier picture” [5].

Sidney Poitier, Gregory Peck, and Brock Peters would be inducted into the Hollywood Walk of Fame for their achievements in acting and humanitarian contributions. They continued to advocate for equality, both in the characters they displayed and off the screen.

The films from the civil rights era changed Hollywood's stance on race immensely, and over the last 60 years, the film industry still explores the topic of equality, openly displaying the truth 24 times a second.

TCM and Fathom Events are bringing In the Heat of the Night to theaters October 16 & 19 and To Kill a Mockingbird November 13 & 16 as part of the TCM Big Screen Classics series. For more information about any of these events, visit our events page.