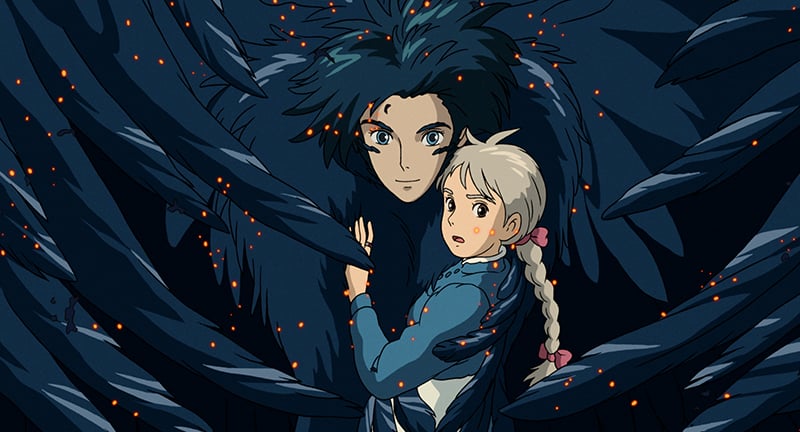 From Pen to Screen, The Artistry of Studio Ghibli

The foundation of Studio Ghibli in 1985 marked a new era in animation, Ghibli, the Italian phrase for “hot Sahara wind” would symbolize founders Isao Takahata, Hayao Miyazaki, and Toshio Suzuki’s vision of “blow[ing] new wind through the anime industry.” The trio set out to explore the human experience, to transport viewers into vivid, natural worlds, allowing them to explore immersive realism, and create connections with its inhabitants.

Immersive realism is defined as “deep absorption or immersion in something such as an activity or a real/artificial environment while including realism [2].” From its characters, worlds, and storylines, Studio Ghibli animation has embraced the concept of immersive realism, inspiring us with captivating stories and exciting new worlds for the last 37 years.

Whether you are new to Studio Ghibli’s animation or a devoted fan, please join us as we highlight the artistry and magic of this iconic studio for Fathom Event’s Studio Ghibli Fest 2022. 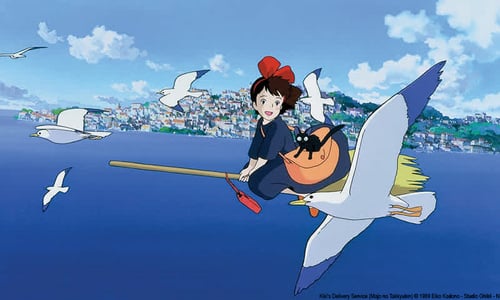 Legendary director Hayao Miyazaki told novelist Ryu Murakami in a 1988 interview, “I gave up on making a happy ending in the true sense a long time ago [3].” Not bound by the inelastic formula of good and evil, he was able to build unique worlds, exploring his immersive realism.

A perfect example of Miyazaki’s worldbuilding can be seen in one of his most celebrated and optimistic films, Kiki’s Delivery Service. The film follows the story of a thirteen-year-old witch, Kiki, as she sets off to discover who she is, facing struggles along the way. Despite the challenges of finding a new home, starting a delivery service, and following in the footsteps of other witches before her, Kiki grows and creates a supportive community. By the end, she has found the balance she, like many of us, aspires to achieve.

Isao Takahata is no stranger to immersive realism, often taking the stance of “[capturing] the reality behind the drawn lines [4].” Animation brings fiction to life, capturing the truth between the lines, and exploring the human condition, something that is evident in his film, Only Yesterday. 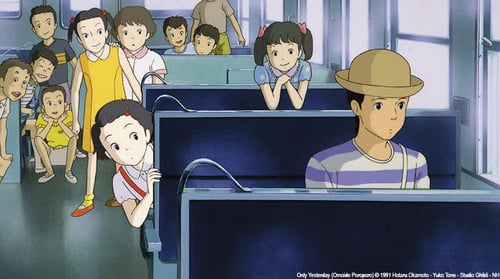 Set in a completely realistic world, Only Yesterday weaves its story around the main character Taeko, a young adult who has lived her whole life in Tokyo. One day, Taeko decides to venture into the countryside, reliving her memories as they flood her reality. This combination allows the film to explore the beauty of being human. From the joys, vulnerabilities, strengths, and complexities, everything Taeko experiences brings her closer to understanding relationships and her quest for self-fulfillment.

During her journey, she forms a romance with Toshio, a family friend who harvests flowers for clothing dye. The love blossoms and evolves on-screen as Takahata masterfully connects the two through real-life Japanese poet, Matsuo Bashō. The pair quotes him, saying to each other “In time whose skin will grace it, this crimson flower [5]." 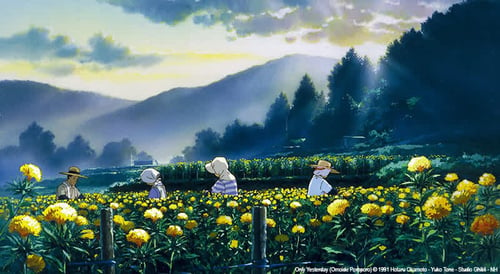 In doing so, he paints a picture depicting the importance of the natural world and the issues in contemporary Japanese society. This was the reality Takahata pursued, infusing the cultural shock of the tech bubble bursting in Japan during the 1990s, and what it meant to be human in the face of all this. 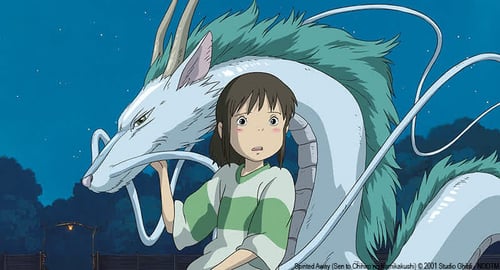 One of Studio Ghibli's most iconic films and the first non-English Oscar winner for Best Animated Film, Spirited Away reimagines Lewis Carroll’s Alice in Wonderland by creating a magical world hidden in an abandoned amusement park [6]. The world of Spirited Away, discovered by Chihiro after her parents succumb to a spell of gluttony and turn into pigs, is both magical and immersive. Each character exhibits complexity while displaying realistic emotions, truthful feelings, and relatable desires, all highlighting the human condition.

Much like Miyazaki’s 1997 epic, Princess Mononoke, depicting the struggle between humanity and the mortal and spirit worlds, Spirited Away celebrates the eccentric connection between these worlds. 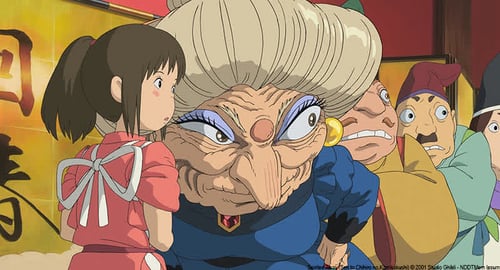 Studio Ghibli takes viewers on a journey through Yubaba’s bathhouse for the spirits as Chihiro works to free her parents, embracing the power of individualism, and helping the magical inhabitants discover theirs.

Fathom Events will be bringing Spirited Away to theaters nationwide to celebrate its 20th anniversary on October 30 (English dubbed), November 1 (English subbed), and 2 (English dubbed).

Directed by Hiroyuki Morita, The Cat Returns follows the story of Haru and her journey into the Cat Kingdom after saving the Prince of Cats. Unlike Isao Takahata and Hayao Miyazaki, who weaved much more serious themes into their stories, Morita wanted to explore the purest form of joie de vivre (exuberance of life). 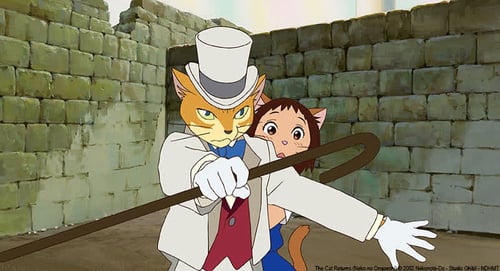 In doing so, he created a very lighthearted and innocent story while still adding character complexity. Each one of the cats Haru interacts with has a wonderfully distinct personality. From the King of Cats to the grumpy Muta, they all offer their unique voices and emotions, playing on a childlike vision of the world. 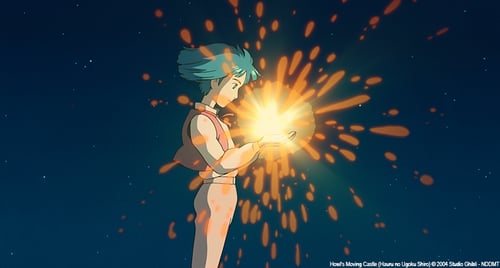 Exploring the duality between freedom and confinement, Howl’s Moving Castle masterfully crafts a magical world without losing sight of the themes it explores.

Studio Ghibli introduces us to Sophie and her mundane life working in a hat shop. Sophie is confined to a typical and uneventful reality, going through the motions until she is cursed by the evil Witch of the Waste, and turned into an elderly woman. She then embarks on a journey, meeting the equally restless Wizard Howl and his, quite literally, moving castle. 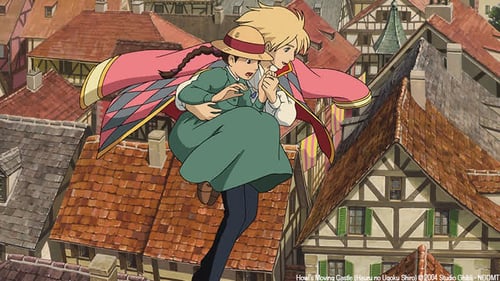 Miyazaki blends magic and realism in this world, creating recognizable human behaviors as we experience Sophie’s literal and metaphorical transformation, offering an inspiring message of growth and self-discovery.

To captivate an audience, animators and storytellers must construct their worlds around fantasy and reality, balancing them around each other, allowing viewers to become fully immersed in this new world. Studio Ghibli’s revered animation provides a distinct lens into the vision and artistry of some of the greatest animators and directors.

Hopefully, this article has revealed the modus operandi of the new and familiar Studio Ghibli films. We hope we’ll see you at one or maybe a few of these events throughout the year! To find out more about this celebration of legendary animation, or to see if one of these films is playing at a theater near you, visit our event page!