The Thing, a Cult Classic that Inspired Generations

Throughout the decades, science fiction and the horror genres have played off the fears of their respective times. Either seen as products of the era or timeless classics, they have shocked audiences and left lasting impressions.

However, every once in a while, a film comes along ahead of its time and inspires a generation of filmmakers. John Carpenter's, The Thing (1982) did just that. Originally released on June 25, 1982, the same summer as E.T. The Extra-Terrestrial, Blade Runner, Rocky III, Star Trek II: The Wrath of Khan, and Poltergeist, the film polarized audiences and fell far short of studio hopes and industry expectations. Although not an abject failure – its domestic box office ranked 43rd for the year – for critics, The Thing became a punching bag, an example of a film that, in their opinion, had prioritized special effects over character and story. But time tends to reshape perspectives. As the decades went on, the film would evolve into a cult classic, and its influence can be seen in today’s entertainment.

In honor of the 40th anniversary of The Thing, in theaters June 19 and 22, we want to share some of the influence the film has had over the years.

When it comes to The Thing’s influence on legendary directors, look no further than Quentin Tarantino. An avid lover of horror movies, Tarantino has often praised the film. During The Late Show with Stephen Colbert, he discussed his admiration for it saying, “I think it’s the greatest horror movie ever made, if not one of the greatest movies ever made.”

The influence of The Thing on Tarantino would find its way into his films. Reservoir Dogs (1992) explores the paranoia within a group of men trapped together in a warehouse, mirroring the tension within The Thing’s Antarctic research group.  He wanted to capture the same uneasiness the audiences felt when watching it, stating “I wanted the paranoia of what’s going on to bounce across the walls and hopefully, like The Thing, go out into the audience.”

Tarantino would elevate this feeling in The Hateful Eight (2015) where he would trap his characters in a remote haberdashery in Wyoming. A piece of Carpenter’s original casting was even replicated with Kurt Russel starring as John “The Hangman” Ruth. Tarantino included unused music from Ennio Morricone’s score from The Thing to fuel the sense of isolationism, much like John Carpenter.

The Duffer Brothers are no strangers to The Thing, leaving easter eggs and paying homage to it throughout their wildly popular Netflix original series, Stranger Things. Mike has a poster from the film on the basement wall, science teacher, Scott Clarke, and his girlfriend are seen watching The Thing on VHS (Season 1), Lucas discusses it while drinking Coke (Season 3), and in the recently released Season 4, Jim Hopper is a prisoner at an isolated snow-covered Russian camp (in similar The Thing fashion) where a Demogorgon is being held. 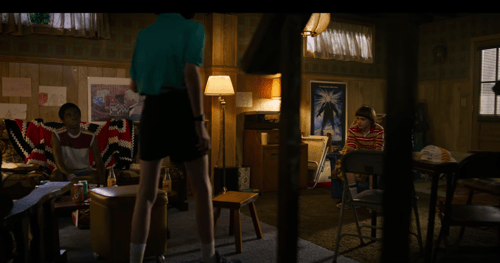 One of the biggest driving factors for The Duffer Brothers using practical effects when creating their monsters was Rob Bottin’s work on The Thing. Inspired by his ambition, creating various molds, and experimenting with everything possible, they wanted to stay true to what they grew up watching while still deviating from the norm and creating something unique to their story.

Much like Stranger Things, Steven Kostanski and Jeremy Gillespie took inspiration from The Thing’s special effects and themes. The Void is a very Lovecraftian, special-effects-driven horror movie.

Although, The Thing is a direct adaptation of one of John Carpenter's favorite novellas, Who Goes There? By John W. Campbell, it still shares some Lovecraftian influence. The Void pulls from Carpenter's setting, trapping its protagonists in a hospital that is besieged by a mysterious cult. As the Eldritch horrors emerge, we see the anamorphic influence of Rob Bottin’s special effects. 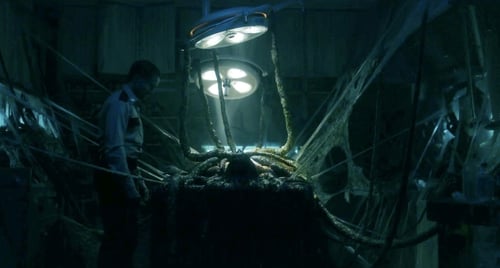 Celebrating 40 Years of The Thing

From Quentin Tarantino’s universe to a Lovecraftian variant, The Thing’s influence has permeated contemporary entertainment, leaving lasting (and terrifying) impressions on viewers and filmmakers daring enough to watch it.

Other notable examples of films inspired by The Thing are: Dan Trachtenberg's 10 Cloverfield Lane, Neil Marshall’s The Descent (both play with the paranoia-fueled, isolated plotline), and Alex Garland's Men (2022), who took inspiration from The Thing when creating the imagery for his final monster.

Come celebrate The Thing’s 40th anniversary in theaters on June 19 and 22. For more information, or to find a theater near you, visit the event page!